Our second day on the train was short. We were served a good breakfast and a charcuterie board before disembarking in Moab. Both were delicious. Our first notable sight was the De Beque Canyon, named for Dr. Wallace De Beque, a Canadian and Civil War veteran who settled there in 1884 with his third wife. It is a narrow canyon on the Colorado River, approximately 15 miles long. Geologically the canyon walls are stair-step cliffs of shoreline sands deposited during the Cretaceous era, 145 million to 66 million years ago.

We then passed the town of Palisade, home to the famous Palisade peaches and the beginning of wine country for Colorado, and Mount Garfield, named after the 20th US President, James Garfield. It is 6765 feet high, part of the Book Cliffs, a series of desert mountains and cliffs so named because they appear similar to a shelf of books.

The train then passed through Grand Junction, the second largest city in Colorado, at the confluence of the Colorado and Gunnison Rivers, where fruit orchards and more vineyards are found. Then on to Ruby Canyon. Ruby Canyon gets its name from the fact it is lined with red sandstone cliffs. There is a painting on the side of the canyon indicating the Colorado/Utah state line.

We arrived outside of Maob, at the end of the line. This line does not connect with the major rail line running through Utah because of the ongoing clean-up work to remove uranium tailings on this side of the town, so we rode buses to our hotel destinations. 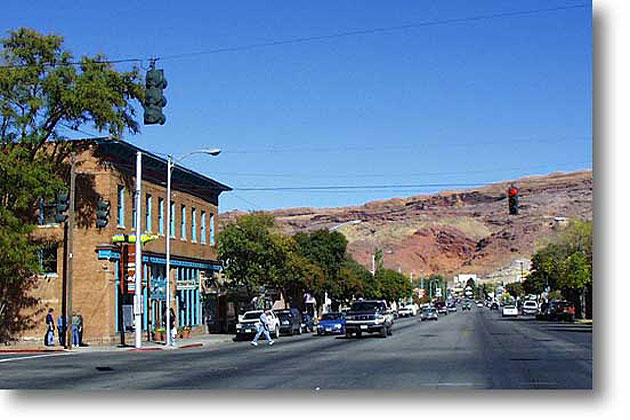 Moab was a typical wild west town, a favorite hideout for many gangs of outlaws in the 1800s because of the surrounding deep canyons.The discovery of uranium in the 1950s put Moab on the map and it now attracts visitors, like us, to come to explore the five surrounding national parks: Arches, Bryce Canyon, Canyonlands, Capitol Reef and Zion.

The following day we visited Arches National Park. Originally a cattle ranch, it was established as a national monument in 1929 and a national park by President Nixon in 1970. It got its name from the over 2,000 rock arches found within its boundaries. Water and ice, extreme temperatures, and underground salt movement sculpted the rock scenery of the park over a hundred million years of erosion. While the arches are the main draw, towering spires, pinnacles, and balanced rocks (rocks balancing on what look like precarious bases) are part of the vistas.  We went early in the morning when it is cool and the air is so clean and fresh, you want to spend time thinking about breathing!

I’m just going to show you some of my favorite rock formations.

A pocket arch – not all the way through

And one that seemed to be giving us the middle finger!

The next day, we headed to the La Sal Mountains, traveling down the Colorado River valley and then climbing to around 5000 feet. The view down the valley was spectacular and I could have sat there all day, enjoying the cool breeze, and the clean and fresh air, and absolute quiet, except for the wind in the pine trees!

I hope you enjoyed coming along on our trip as much as we enjoyed taking it!

24 thoughts on “End of the Line: Moab, Arches National Park and the La Sal Mountains”